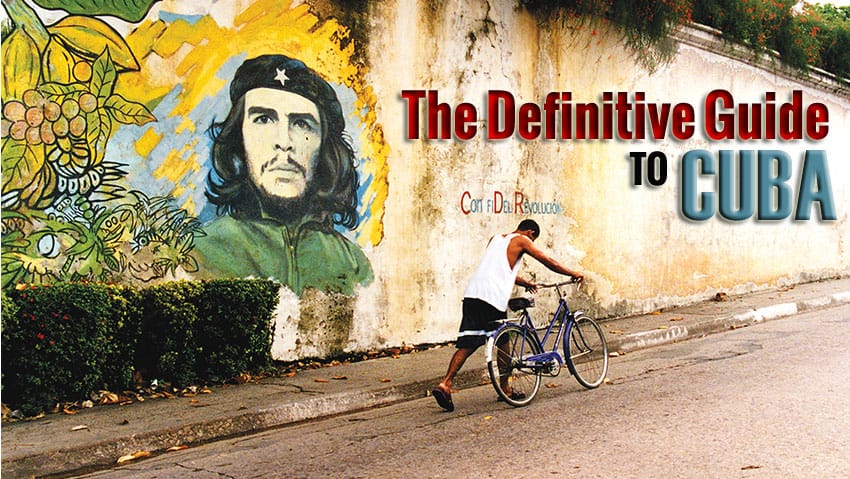 HOW TO AVOID SCAMS, SEXUAL TOURISM AND MOVE AROUND CUBA:

Bargaining your way through the country: jineteros and the fair prices of transportation.

This is your once in a lifetime chance to master your bargaining skills – should you succeed in winning the bargaining game, an award will be provided at the check in desk of your returning flight.

Ok, back to being serious… Cubans are smart. Really smart. Poverty has taught them how to survive, and they will take advantage of you when they can.

Without ever threatening the unaware traveller, they will insist, charme, and do anything to have things their way. Travelers lose their humanity here, and to most Cubans anybody who is not from the island is literally a walking ATM. I found this humiliating.

Others may have a more pragmatic approach and simply accept it as a status of things. For as sad as it is, men and women alike do go to Cuba in search of sexual tourism. Be prepared to see good looking young men accompanying middle aged foreign women who will be living a second youth; or beautiful teenager girls (little more than children) sitting right next to men old enough to be their grandfathers.

Or even adult women who, lacking good looks (think body and facial hair and big features), make it well up with their charme, laughter and good manners and will offer their company to foreign men for the fees that will help them pay the bills for the rest of the year. They all want a better life. 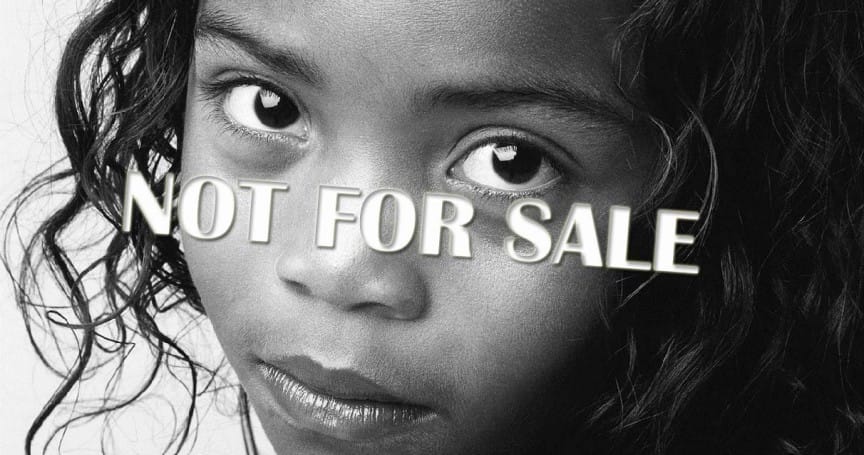 SCAMS AND JINETEROS IN CUBA:

You will be called, invited, asked if you want company or sexual favors, begged for clothes, soap and each one will have a heartbreaking story to make you want to give all you have.

Some of them are genuine, but not all of them. People will invite you for a drink, until you will eventually be presented with the bill – for both yourself and your host. Beware of this, it is a common practice. It is up to you to decide if you want to pay or not, but you should go in prepared.

The unaware tourist will fall for scams so easily that it may be worth spending a few words preparing you so that you’re not ripped off on a regular basis.

Keep in mind that the Spanish spoken in Cuba will test the understanding abilities of even the most fluent of speakers: Cubans speak fast, mumble a lot, and their body language and slang is completely different to what you may have learned in other Latin American countries. People will generally make sure you understand what they say, but at times they may take advantage of the fact that you can hardly get a word.

The first word one has to learn in Cuba is jinetero. Although the literal translation  is “sex worker”, the word implies much more than just sexual favors. A jinetero is usually an intermediary – he is the person that normally offers you a taxi ride and negotiates the price with you (and tries to rip you off).

He will suggests you to go to a certain casa particular or paladar or you’ll meet him outside the casa particular you have booked, telling you that the owner died and will want to take you to a different one.

ADVICE ON TRANSPORTS IN CUBA:

Whereas with casas and paladares the prices are more or less settled and there is little to bargain (although you may be annoyed by a jinetero who pushes you to opt for a specific place, because he will get a percentage for bringing in customers), it is when it comes to transportation that they become tricky.

They will shoot the prices to skyrockets levels, and tell you there are no buses leaving on that day, or that all the seats are taken. Anything to make you hop on that car. Be prepared to negotiate, and don’t be ashamed to become a ruthless bargainer.

Do your homework beforehand: always ask for fair taxi prices at your casa particular for example. Knowing the right price will give you more leverage when negotiating the fares. Be prepared to walk or take the bus if necessary. 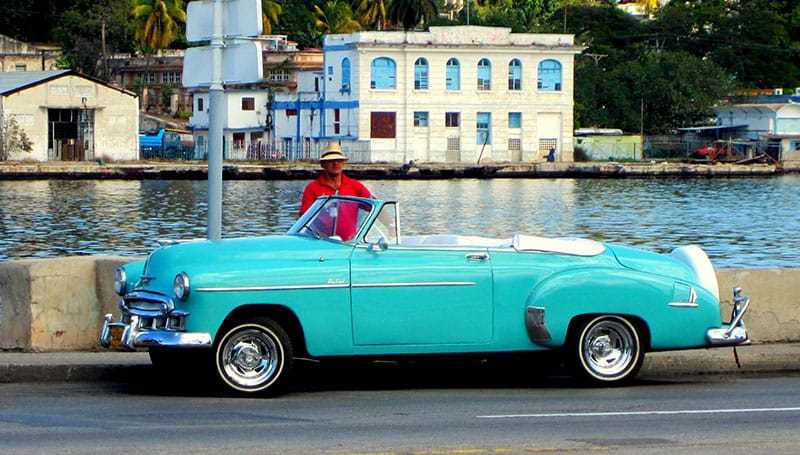 To give you an example based on my experience:

I went to see the ceremony of the Canonazo at La Fortaleza de San Carlos de la Cabaña. The taxi fare back to my casa didn’t cost more than 3 CUC. As the ceremony ended I was literally surrounded by taxi drivers and jineteros. I told them what my destination would be and they gave me very high prices.

I tried to bring the price down. As nobody seemed to agree, I told them that I would just walk, it was a pleasant night after all. Then and there, someone decided that he would take me for 3 CUC.

Same thing with long distance taxis. I was in Viñales, and had to go to Las Terrazas (by the way, don’t go: you really don’t miss much). A bus ride would cost me 8 CUC. Two of us were traveling, so we figured that if a taxi would take us there for 20 CUC as opposed to the 16 we would have to pay for the bus, that would be a fair price. We negotiated down from the initial suggested price of 50 CUC.

Be prepared to share a taxi – traveling with little luggage  comes in handy in this case. Some places are hard to reach via public transport and you may want to spend a few extra moments at the bus station to check if other travelers are willing to share a taxi with you. 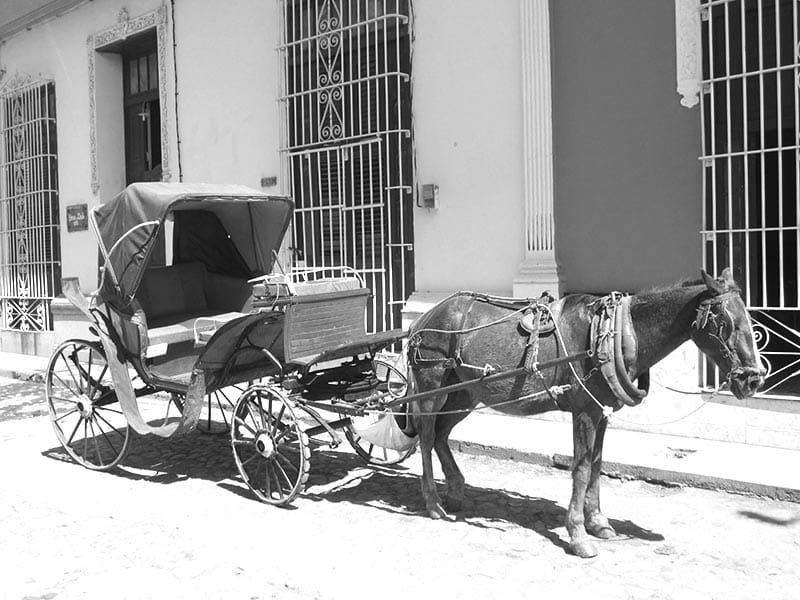 Maybe the horse is a safer bet? 🙂

It will be faster, and the price won’t change much. Bus rides are OK, if you can put up with the bus stopping whenever the driver has to pick up or drop off something (ie his groceries for the day!), or with the super-low air conditioning that makes you freeze even when it is really hot outside.

Means of transportation vary – from the regular old Russian ladas, to new toyotas, to the amazing vintage cars (some are very well kept), to rotten cars made up of pieces of various different ones. Not to mention the bici taxis, the coco taxis, the horse carriages and the camionetas – not for the faint hearted – that you will see in each city.