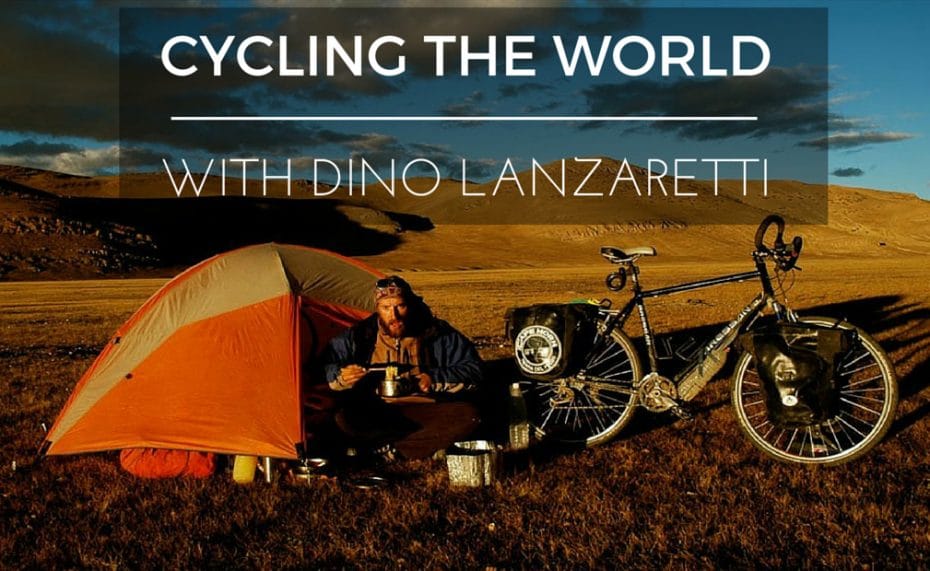 “The adventure, the challenge, the curiosity”

These were the main triggers that pushed Dino Lanzaretti (renamed by me “the Gladiator”) to pedal the highest, loneliest and most difficult roads in the world, and these are the things that made him a source of inspiration for me and for all the people who have met this incredible guy!

Dino in Namibia with his bicycle

Some of you might have already noticed, but I am not a big fan of interviews to other travel bloggers, with one exception in here. Don’t get me wrong, we do super cool stuff sometimes, our life is seldom boring but still…

There is a whole world of travelers doing epic things out there, people who embarked on extraordinary adventures without necessarily documenting them online, and if they do, their blogs are not a full-time business.

I consider myself super lucky to have met one of them and today I’m super excited to share my friend Dino’s epic story with you! Dino is without a doubt one of the few true explorers and adventurers remaining. We met by chance in a villa in Calabria –Italy- for the “Favella Lab” project where nine creatives, sharing the same roof for a week, had the “mission” to produce a video with the theme “freedom”.

He entered the house in Calabria quietly, however not surprisingly he was able to capture the admiration and respect of everyone in just a few moments. Dino showing his Gladiator skills in Calabria 😀 (and the proof that I really met this champion!)

A big Italian guy from Vicenza, born in 1977 like me (we are the best after all 😉 ),  crazy enough to jump on an old bike to embark on a solo cycling trip around the world.

From Africa to Tibet, from the Himalayas to South America, Dino – and his old bike- have really experienced the world and its people in a truly authentic way, not without difficulty, but that’s exactly what makes him special.

To me, his videos are a mix of two of my favorite movies of all times :“Into the Wild” and “The motorcycle’s diaries”, no wonder why Dino is my hero!

Here is Dino’s summary of his epic journey in Tibet. FYI, he says “Basta!!!” a lot, wich means “Enough!”. I can’t blame him… I mean I could have never done anything like this! Kudos to him.

We bloggers secretly -or openly- feel like heroes whenever we venture into dirty hostels, mingle with the local communities or do something slightly out of our comfort zone. What about Dino, who only travels with his small tent, a camp stove to cook his meals and a backpack full of jackets, food supplies and a lot of determination?

This video is so inspiring and scaring at the same time. Dino was cycling through South America and this is the one video that really reminds me of the movies “Into The Wild” & “The Motorcycle Diaries”. It gives me the chills!

A LITTLE HELP FOR THE NON-ITALIANS 🙂

If you don’t understand Italian, in the beginning of this second video Dino was at a “crossroad” and he’s evaluating his options: on one side, 2,500 kilometers of cycling against very strong winds, on the other side is the Chilean Border and the Carretera Austral  with its very cold climate and rain showers (but less windy).

He decided  his next destination (Chile) with the simple “Head or tails” technique. LOVE IT! I used the same technique so many times. Totally random and exciting, no matter what.

If you took the time to watch the video, you’ve probably noticed how simple yet energetic Dino is. He’s a gladiator with no frills. Just like a true explorer should be: completely free from constraints and filters. Dino is a very straightforward person. You can see him cursing at the winds, the snow, the many falls from his bicycle and everything that stands in his way. And this is what makes him REALLY free.

“We all have our fears … running away from them might not be the right choice. I decided to pedal instead. – Dino Lanzaretti–

In this short video produced for the Favella Lab project, Dino managed to capture the essence of his life riding a bike: the fears, the real and metaphorical falls experienced during his many adventures and the desire to stand up again after every obstacle.

In Calabria Dino and I, apart from the laughter and shenanigans around a table full of fantastic Italian food, took the time to talk about this weird world of blogging.

“Yes I have a blog, but I rarely write on it,” he said. At that time he hadn’t even uploaded a single video on his website.

Back then I was still a blogger obsessed with numbers and monetization and I tried to explain to him that with such an incredible amount of video and photographic material in his hands, he had the chance to become a real superstar. Needless to say, he couldn’t care less.

“I travel for the sake of travel” he candidly replied to me. “I’ll think about everything else later”.

And do not assume that you are in front of a spoiled rich guy who can afford to drop everything and take a “vacation” for months to travel around the world.

Every single kilometer pedaled (he has more than 52,000 km already on his legs) was earned not without sweating. Dino’s life is split in two: for months in a row he works very hard as a cook to fund his adventures and when the money is enough, he grabs his bicycle and leaves for his next destination. These are his words, taken from on of his blog posts:

“The point is to be here in the moment, not dreaming of going somewhere else. I have no way to quantify the immense effort and the tears I had to pour while riding my bike, but I am absolutely convinced that it was worth the effort. I have this strange feeling that’s been with me for years: I think I won the lottery without buying the ticket “

This world of travelers who left everything behind is curious. To some extent, we all share this feeling as if we have won the lottery without buying the ticket.

However, Dino – just like me and many others – doesn’t want you to believe that winning the lottery means that this life of ours is perfect, just filled with fantastic adventures, and without any obstacle. Dino  camping in the wild in Tibet

“In those first 8000 kilometers, I railed against Gods that I didn’t even know existed, I broke the bike dozens of times and have been the victim of numerous physical injuries because I wasn’t well prepared. It could have been better but I started to realize what kind of life I was about to begin”

Our way of life is a choice like any other, which also includes sacrifices, sweat, tears and sometimes loneliness. No one imposed this lifestyle on us, he chose it freely.

And as much as we might struggle during the swearing moments of despair that come with this choice, deep down, we know that choosing what to do with our lives is a feeling like no other. Maybe even better than winning the real lottery!

As usual, I digress, but I could talk about Dino’s story, his philosophy on life and his marvelous trips for days.

The life lesson you can take from him here is not “drop everything and travel!” But, as I always say: “Don’t dream your life, live your dream”

And Dino is definitely doing it. Well done champion. Till we meet again!

To close this article “Clelia’s style”, I want to show you what It would be like for me if I ever decide to emulate Dino’s epic adventures….(You just need to watch the first 50 seconds to get the idea, yep..I’m a total fraud! ahahah) 😀 DO YOU HAVE AN EPIC TRAVEL ADVENTURE TO SHARE? LET ME KNOW IN THE COMMENTS!